I'm either writing, watching or cooking

What's on my mind

Can we talk about Harvey Girls for a second?!

Because I've been haphazardly cooking my way through the Vincent and Mary Price cookbook, I recently whipped up some Harvey Girl Special LIttle Orange Pancakes.

Absoulutely delicious and super easy to make, the recipe is literally: grate and juice 4 oranges, add 1 c. pancake mix, fry in butter. I sprinkled brown sugar on top with the melting butter because that's how I do.

I noticed them in the American section of the book. Yeah, seperated by country. Or rather, by the best restaurants in all they countries they ate in because he was a world class gourmand/goddamn movie star and that's how THEY do. It's listed with several other Sante Fe Super Chief Dining Car breakfast recipes which the Prices said made the best breakfasts they'd ever had. Ah, Vacation Food, clearly the best eats in the world...even when you can afford the literal best in the world.

Makes me feel a little better about my affection for hotel room coffee.

Usually drunk the morning of checkout, sweetened with Equal (which I hate) because there was only one sugar packet.

But what caught my eye in the Table of Contents was the "Harvey Girls," because...can we talk about that movie for a second?! That time MGM made an inexplicable Judy Garland hit about a restaurant chain?! Costarring hot, young Angela Lansbury, resident MGM Bad Girl, as a whorehouse madam who goes all Heisenberg on Judy and the rest of the goody two shoes waitresses trying to steal her customers?! 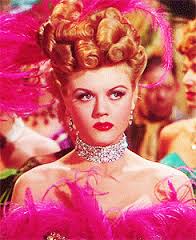 'Stay out of my territory'---the woman you probably picture when someone says the word 'grandmother,' instead of your own grandmother*

Also starring a love interest I cannot remember to save my life and Ray Bolger, working with his Dorothy less than ten years after they made The Wizard of Oz and no doubt thinking 'Oh Sweetie, what the hell did this place do to you?'

And all that seemed to add up into great How Did This Get Made brand cinema for me until I learned how iconic those Harvey Girls were, and how big their impact was on the untold herstory of how the west was really won. http://time.com/3662361/women-american-west/ In Price's description The Harvey House station restaurants are rememberred as a civilizing influence on the towns built around the new railroads and, "The Harvey Girls...are part of the folklore of the West, many of them marrying miners and prospectors who struck it rich and made grand ladies of the erstwhile hashslingers."

Now, Price's nostalgic description is still basically about women finding husbands in the Wild West. But the movie itself is as much more about the adventurous spirit of hordes of young, single women traveling west in search of the open air missing from packed eastern cities or the opportunities the barely civilized midwest was already denying them, finding both in the towns that women like Lansbury's madam character built around their booming illicit businesses. (Adam Ruins Everything; How Prostitutes Settled the Wild West https://youtu.be/fMycRBIXTWk" target="_blank" rel="nofollow">http://https://youtu.be/fMycRBIXTWk

And the more I think of it, the more I realize MGM told that herstory several times, told it well, and made money doing it. Are you listening, modern studio heads?!

How the West Was Won would appear to be your basic Old Hollywood depiction of the Wild West: cowboys, indians, buffalo, war, and wagon trains all rendered in fantastic CinemaScope. But in setting out to tell the tale of one fictional Everyfamily's part in conquering the frontier, from about 1835 to 1900** the epic actually told the tale of two sisters winning the west, alone. One, played by Caroll Baker, just keeps on heading further west after her father dies, eventually joining the majority of homesteaders who were single mothers or women living alone.

The story of the sister who goes Bad (by 50s MGM standards, aka: sings in burlesque, wears red petticoats, falls for the wrong man and gets abandoned) and resorts to joining a wagon train over the initial objections of the leader of the expedition who assumes that a single woman "like her" (coded slut shaming) would cause trouble was actually a subject MGM had devoted a whole movie to with "Westward the Women"

Robert Taylor's character needs wives and families for his lonely workers, and sets up a train full of their prospective mail order brides. Two of them are pretty show girls wanting a fresh start, freed of their eastern reputations.

**aka, the same movie/TV miniseries that gets made every 20 years or so, somehow...at least TNT's Into the West '05 told the tale of two families, one Virginian, one Lakota)

Oops, you forgot something.

The words you entered did not match the given text. Please try again.

Can we talk about Harvey Girls for a second?!
0 comments

Start a Free Blog at Webs.com